Greetings from the other side of the world.  Last month I traveled to South Africa to learn about the wine industry there and explore the Western Cape province.  Traveling to the other side of the globe with my husband took some time, with a three day layover in Istanbul, Turkey letting us get used to the 11 hour time change.  Istanbul was a great country to spend some time in--we could walk to the Blue Mosque and the Hagia Sophia easily from the hotel.  Such an ancient trading port with so much history.

Arriving in Cape Town, South Africa. Cape Town is the mother city of the country.  We flew in at the end of February, which found us in beautiful, balmy autumnal weather.  For several nights we stayed in the downtown area of Cape Town.  The first night we made our way out to the Victoria and Alfred Waterfront, a very modern shopping and dining complex at the marina in Cape Town.  It felt a lot like Monterey or San Francisco, but with a touch of Afrikaans thrown in and some new dishes to sample.  And it was surprisingly affordable in South Africa.  When we were traveling the US Dollar was buying a bit more than 10 Rands.  Dining out with an appetizer, entrees for two and a bottle of wine typically cost about $40.

Things to see and do in Cape Town:  In the next few days we took the Hop-on, Hop-Off tour bus which allowed us to learn about the entire city and spend time at places we wanted to explore a bit more.  We saw all the government buildings including the Houses of Parliament where Nelson Mandela gave his first speech after his release from prison, the church where Desmond Tutu was archbishop, the wonderful Kirstenbosch botanical gardens and the Constantia wine producing area.


Food and Wine:  All good travel includes plenty of wonderful meals, and South African food was very good.  We had a lot of curries and fresh seafood.  I loved trying as many South African dishes as possible, and have a soft spot now for bobotie.  Not so much for biltong, but I wouldn't mind packing it for a hiking trip.  I came across a "pop-up" winery spot near Long Street, and got to sample local food with the wines of Spier.  We also got to have some great pizza with a wonderful Cinsault (2012 Waterkloof, Stellenbosch) at Burrata, a great restaurant run by Neil Grant in The Old Biscuit Mill.  Neil is also the President of the South African Sommeliers Association.

Touring the Western Cape:  From Cape Town we headed out east to Cape Agulhas, the southernmost tip of Africa and then on to Knysna.  Knysna was a quiet waterfront town with beautiful views of the bay and the ocean.  Knysna also had an elephant sanctuary where we got to be with the elephants and learn about their habitat and rehabilitation.  Touring to Mossel Bay had me eating oysters on the half shell with a fun South African sparkling wine.  Delicious!  A surprising hit of this part of the trip was visiting the Birds of Eden, the world's largest free flight aviary.


Game Reserve:  Visiting South Africa as a tourist would not be complete without seeing Africa's Big 5; the elephant, rhino, leopard, lion and the Cape buffalo.  Our trip took us to the Garden Route Game Lodge, where we saw 4 of the 5 big animals.  Our guide did a great job of teaching us about the animals, and keeping us close to the animals but out of harm's way.  We stayed in a private thatched roof cottage and enjoyed ourselves immensely.

Wine Country:  The Western Cape has many wine producing areas, and we visited Franschhoek, a quaint European enclave just to the east of Cape Town.  Winery visits included Glenwood, Haute Cabriere, La Motte and Chamonix. We also got a personal tour at La Carbonne during the harvest, visiting with Winemaker Hardus Van Heerden for a tour of the production facility and samples of the tank fermentations and of the wines in barrel.  Visiting La Motte for lunch we dined on wonderful cuisine at Pierneef a La Motte, an award winning restaurant in Franschhoek.  This was consumed along with a memorable Shiraz blended with Viognier. 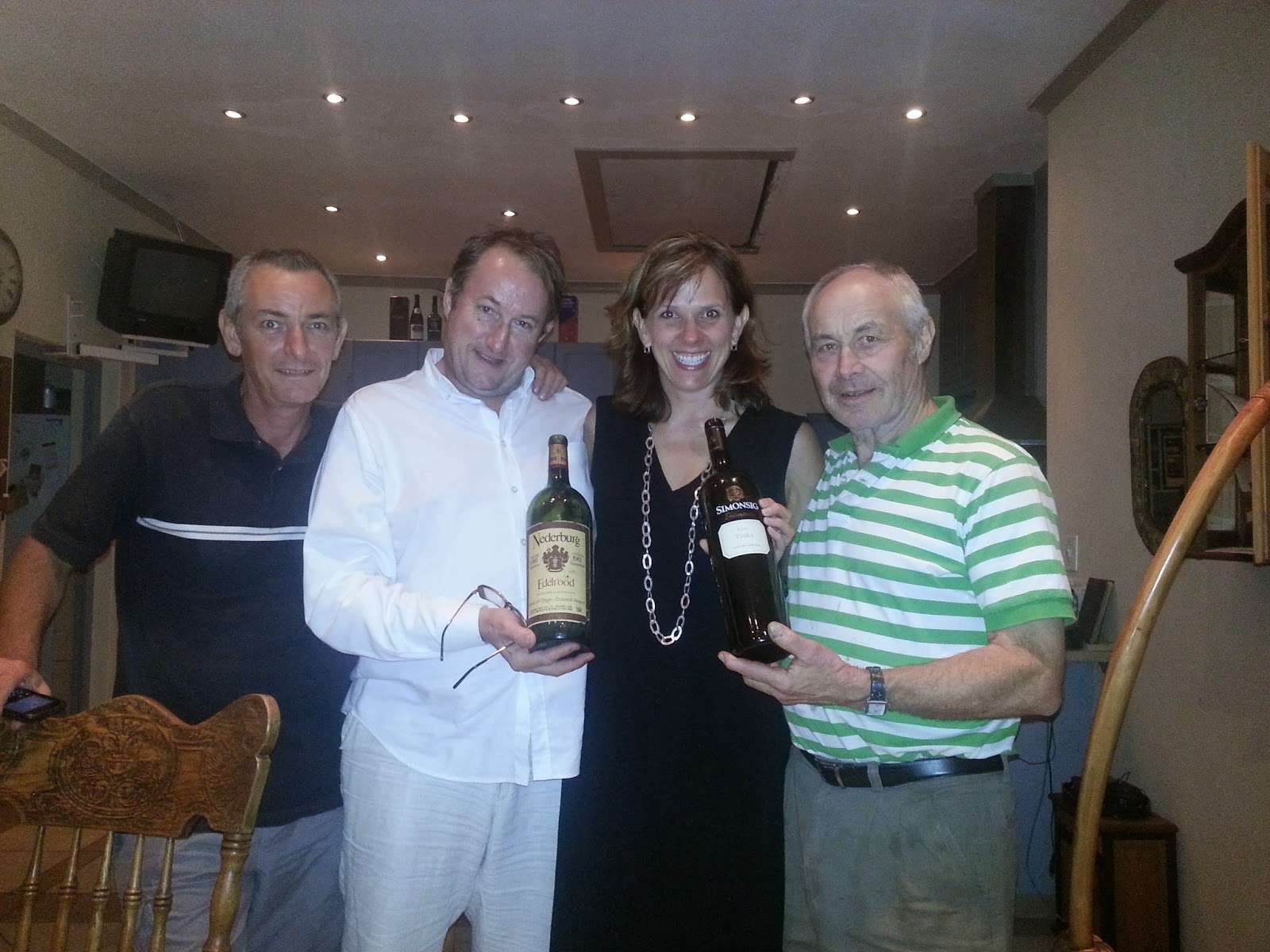 Enjoying a braai with locals:  Upon returning to Cape Town we had the fun experience of a braai at Denis Garret's spot in Woodstock, just outside of The Old Biscuit Mill .  Denis Garret is a wine consultant and sommelier serving as an ambassador for Champagnes and Cognac in South Africa.  Denis hosted us at a friend's house where we had wonderful conversation, home cooked food (the grilled pork belly was yummy), superb wine which included a 1981 magnum of Nederburg Edelrood.  That wine had held up wonderfully and was quite a special wine to share that night.  Denis is very optimistic about the future of South Africa's wine and culinary scene and provides educational and consulting services to promote the wines of the Western Cape.  He's also an excellent host who knows A LOT about wine, a good friend to have!

University of Stellenbosch.  The next day we took the Metro train to Stellenbosch where we visited with Dr. Wessel du Toit who teaches enology at the University of Stellenbosch.  The university is the epicenter for enology and viticulture studies and research in all of Africa.  It was quite interesting to learn about the wine industry and about enological research from a well respected professor in the winemaking field.  Having lunch with Professor du Toit allowed us to find out about the students involved in the program, the connections with the wine industry and about some of the research projects the university is undertaking.


It's All About the People:  As always, the people are the most important component of any trip I take, and everyone in South Africa was extremely friendly and approachable.  From wine folks who took us under their wing to commuters on the train who offered up stories of day-to-day life, through to the street vendors we dealt with, all the South Africans were excellent ambassadors for their country.  South Africa does have their share of challenges to deal with, just as every country does.  We were pleasantly surprised by everything in South Africa, and would go back in a heartbeat--if only the getting there part wasn't so exhausting.  If you are interested in visiting South Africa I give it two thumbs up--way up.
Posted by Amy at 4:46 PM No comments:

There are Two Sides to this Job Hunting Scenario

Yesterday I got a call from a job seeker that I've advised in the past.  He has been job hunting for several months now, and is a bit discouraged about how it is going.  He said that when he sends out a resume to a job posting, he never hears anything back.  Unfortunately, that seems to be the norm when submitting resumes.  From stories candidates tell me, they rarely if ever hear back from a submission, not even a confirmation that their resume was received.

This has got to be hard to take.  Yes, I do advise people to follow up on any submittal whenever possible.  If you just sent your resume to an individual at the company, check back with her before the week is out to make sure she received your resume.  While email is good, if you can call her to check that could just do the trick.  Not all hiring managers like the call, but gauging how often I get follow up I think they don't get a lot of calls.

Why would you want to follow up on a submittal.  Well you would of course want to know that your resume got to the person intended, and also to find out what the status of the job opening is.  You do have to use a little finesse in your follow up, gracefully saying you were making sure your resume was received while also casually inquiring into what the next steps in the review process are.  Being pleasant and also eager are great qualities to exhibit when making these inquires.

Sometimes my best candidate for a job has ended up in my spam folder, and only after they inquired about their submission did I find the email.  It happens, not all the time, but I am sure those candidates are glad they did follow up with me.

Now, I want to discuss the flip side:  What it is like to be a job poster.  Over this past weekend I posted a job to Craigslist.  I put information about the job and that WineTalent was the recruiting company on the position.

Quickly I started getting responses.  Some were very detailed email messages with attached resumes and cover letters.  Some didn't have any email message at all, only a resume attachment.  Some email messages were kind of bossy, "Read this message to hire me for the job", and "Contact me immediately about my candidacy".  This role is for an Executive Assistant who will be handling all of the communications for the winery owner and will be supporting the company in many different settings.  Attention to detail, strong interpersonal skills and a professional demeanor are all traits I am looking for in this person.  My first impression is going to come straight from the first email communications.

Knowing that all too often candidates never get any feedback about their submittal, I can understand if they don't put much effort into the submission.  If you'll never hear back why bother finding out anything about the company or the person you are submitting to?  I can understand the logic there.  But maybe you need to go the extra mile when you are sending your resume to a posted job listing?

Now I'm not one to complain (That's Cranky Recruiter's job), I do think if my contact information is on the posting a candidate could address the email to me directly.  Granted, Craigslist does use a blind email submission process, but someone could still find out who they are sending their information to.  Doing a quick Google search of the word WineTalent immediately brings up my website.  If someone pulled up my website they could probably quickly find out who to address an email too.  Maybe addressing it to Dear Sirs isn't the best salutation...?!  Also, if I have listed that I'm recruiting for my winery client, maybe discussing your interest in working at my winery doesn't make sense.  I don't have one, only many of my clients do.  And if you note on your submission that you are impressed with the wines I have produced and you want to be involved in a world-class production operation like mine you really do not know who you are submitting your resume to.

So what?  You want a job and I'm going on about etiquette in email submissions.  I will say that some folks who submitted their resume have already gotten a call from me, and I'm off momentarily to conduct an interview with someone who sent her resume in yesterday.  Why did these submissions make the cut?  These emails were professional and directed to this specific job posting.  The emails expressed their relevant experience to the job posted.  They were concise yet compelling.  Of course their resumes showed they had solid work histories and the skills needed for the job. 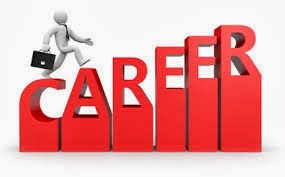 Take the time with the first step, and you'll set yourself up nicely on the path to a new job.