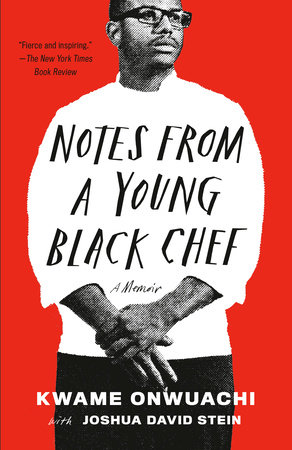 Just finished up Notes From a Young Black Chef:  A Memoir by Kwame Onwuachi with Joshua David Stein.  I could barely put the book down--and can't wait to try the gumbo recipe on page 22.

Kwame Onwuachi is a young, successful chef based in Washington D.C.  This book takes us through his life; from his youth growing up in the Bronx, NY, to being shipped off to live with his grandfather in Nigeria, back to his teen age years in New York City and then through his journey into the culinary world.

Kwame Onwuachi is a charismatic young man.  He has gained celebrity with his time on the 13th season of Top Chef and then when he opened up his restaurant Shaw Bijou in Washington D.C.  After a mighty fall when Shaw Bijou only stayed open for 3 months, he was asked to open the restaurant at the new InterContinental Hotel in D.C.'s Southwest Waterfront district.  This restaurant, Kith and Kin, has become a standout culinary destination.  Food & Wine magazine named Kwame a Best New Chef in 2019 and that year he also was named Rising Star Chef of the Year by the James Beard Awards.

These accolades and the success he has found was not unearned.  This memoir details Kwame's upbringing, his young adulthood and his early successes in the culinary world.  Kwame also describes his wonderful relationship with his mother who was a great cook.  After some missteps (gang violence, school expulsions and drug dealing), Kwame dedicated himself to cooking.  His first real foray into cooking was as a cook off the coast of Louisiana on a ship cleaning up the Deepwater Horizon oil spill.  This first real commitment to cooking quickly showed Kwame how good of a cook he was.  This led him back to New York City, into his own catering business and then into the Culinary Institute of America.  Afterwards, Kwame went on to work at Per Se and Eleven Madison Park before opening up his own restaurants.

This memoir describes the struggles Kwame went through--both as a child and as a young man--to find a place in this world.  He talks about his troubled relationship with his father.  He discusses his choices in his education.  Kwame also shows how hard he worked, how hard he wanted to get ahead, and how he dealt with adversity.  He doesn't always put a beautiful filter on his history, which makes me appreciate his candor even more.

Kwame is also a die-hard entrepreneur.  From selling Hurricanes at college to make a buck, to selling candy on the New York Subway to start his catering business, he was always hustling.  And he was good at it.

Kwame's memoir is a great read.  The story is so good it is being turned into a movie with Lakeith Stanfield starring as Kwame.  Can't wait to see it.

To hear Kwame's interview with Dan Pashman of Sporkful, click here for Part 1, and here for Part 2.  This is where I first learned about Kwame.  And you can hear a lot of other great "eater" stories from Dan--totally worth listening too.  Although I disagree with Dan about how to correctly eat a piece of pizza.  But that's for another blog post......
Posted by Amy at 7:47 PM