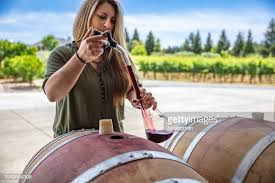 Fields can open up to women for more positive reasons, though, including standout successes by early female entrants. Amy Gardner, president of WineTalent, a wine-industry search firm, takes note of the way female winemakers Heidi Barrett and Celia Welch won worldwide acclaim for their work, starting in the 1990s.

“They had to fight hard to be recognized for what they do,” Gardner says. But with successes like Barrett’s ability to repeatedly win perfect 100 scores from wine critic Robert Parker, Gardner says, the wineries that she works with have become “very receptive to female winemakers.”

Megan Brodie has seen this transformation play out in the past decade. When she studied winemaking at the University of California, Davis, “I don’t think I met a single other female in my first two years of classes,” Brodie recalls. But by the time she graduated, Brodie says, the gender ratio “was close to 50/50.”

“I still get some people who visit us at Karah Estate Vineyard, start a conversation and then ask if they can meet with the winemaker,” Brodie says. “I tell them: ‘You’ve been talking with her for half an hour.’ But most people are excited to realize that a woman can be the winemaker.”

Happy to see winemaking is gender inclusive!
Posted by Amy at 12:25 PM