Where in the Wine World is WineTalent

Was out and about on Friday in the Napa Valley, and stopped in at a small, education related winery. If you are looking to get some wine knowledge, you should stop here too, or just brush up on your sensory evaluation. Where in the wine world is WineTalent?
Posted by Amy at 2:49 PM 5 comments: 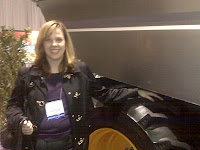 Last week the Unified Wine and Grape Symposium was held here in Sacramento. It is one of the largest seminars and trade shows that the wine industry has. I have been attending it for years, and it is always a barometer for how the wine industry is doing, as well as more personally, how WineTalent is doing. It was at the 2005 Unified Symposium when I offically announced that I was opening my own winery executive recruitment company. Prior to that, I had attended the meeting for several years while working for my old employer.

Every year the seminar covers the overall economic situation for the wine industry as well as current trends in sales, marketing, winemaking and viticulture. Having attended it for years, I've seen those charts arrow up and down. I've seen the changes in winery marketing involving websites, blogs and now Facebook and Twitter. The big wines have gone from White Zinfandel to Cabernet Sauvignon to Pinot Noir. And I've looked at a lot of tractors and other machinery in the trade show.

But one notable change that I saw this year was a dearth of postings on the Job Board. (yes, there had to be an employment slant to this posting, dear reader). From the first year I attended I have put a job posting on the job board that Unified has set up outside the exhibit hall. I have become such a slave to the job board, I now jockey for space on the board the first day the convention center opens for registration. This year I quickly put up my business cards front and center on the board and followed up with my marketing posting the first day of the symposium. Checking back on it from time to time I replenished my business card supply and checked out any other postings that were there. I started to see an alarming pattern. There were VERY few other postings up there. I think by the end of day three there were only four jobs listed from wineries, of which at least one was a summer internship. There were several cards posted of job seekers and consultants which is not unusual. One surprising thing was that none of my usual recruiting competitors were there.

While I was able to get WineTalent posted front and center, this lack of other winery jobs is troubling. Going to visit some of my old friends in the trade show I grabbed Wine Country Classifieds recent mailer. This only had one or two jobs listed. I know Winejobs.com hasn't had the usual volume of advertising. Yes, it is a slow time for hiring many winery jobs, but there are usually more openings that what I saw last week.

The economic and business discussion during the seminars reflected the tough times many wineries have faced in the last 12 months. But wine consumption is up again this last year, and several wineries have experienced good sales for 2009. While small producers and high priced brands were hit hardest, there were still many success stories in those areas, as well as wineries that had stellar results. While many of the experts were quietly optimistic, this was not evident on the job board. There have been some comments that things are beginning to improve and the economy is getting better--both for the economy at large and for the winery world. I do see some new energy going into recruiting and have a sense there will be some increased movement in the job market this year.

One surprising turn of events this year was that someone ripped my posting down. Three days I had it up with no problems--which is normal. When I went by on Thursday, it was nowhere to be found. A couple of my cards were still on the board from days earlier, and I did have a backup posting which I quickly put up. But I was surprised that with all the real estate up for grabs, my posting would be taken down. There were a few business cards from a recruiting service I have never heard up right where my posting had been. Did they take mine down? I think there is room enough for a few winery recruiters in today's market, and there was plenty of area for more business cards to be tacked up. I hope it wasn't a mean-spirited recruiter who removed my information. We all need to be professionals in the wine business and the recruiting business to make sure people--both candidates and clients--want to do business with us.

Ok, so maybe there is a bit of the Cranky Recruiter in this post, but I do see things improving out there on the job front. It may be taking longer to find a job, but let's hope it is thawing out a bit and new opportunities will present themselves to you. Keep chipping away at your job hunting activities--patience and persistence often brings rewards to those who practice them.
Posted by Amy at 1:41 PM 1 comment: