The Interview over Lunch: What to Do?

This morning I was reading the job section of the newspaper, and this study caught my eye: The Imbibing Idiot Bias:  Consuming Alcohol Can be Hazardous to Your (Perceived) Intelligence.  This study conducted by researchers at the University of Michigan and University of Pennsylvania looked at how people's perceptions of another changed when the person ordered an alcoholic drink during their meeting.  The researchers found that when a person ordered or drank an alcoholic beverage, the other person thought they had lower intelligence.  As they stated,  "We find that the bias may be costly in professional settings. Job candidates who ordered wine during an interview held over dinner were viewed as less intelligent and less hireable than candidates who ordered soda. However, prospective candidates believe that ordering wine rather than soda will help them appear more intelligent."  Hmm, sounds like something I should explore!

Often, I conduct interviews over lunch or dinner at a nice restaurant.  Being in the wine business, these lunches regularly occur in wine country and at places with very nice wine lists.  It is natural to order a drink, right?  No, it is never a given that any alcohol will be consumed during these meetings--but the very notion of having a drink is full of speculation--on my part yes, but I am sure on my guest's part too.

Case History One:  Several months ago I was asked by a friend to do a mock interview of their son who wanted to make his way in the wine business world.  Having almost finished his degree in business and with prior work experience in wine sales and restaurants, it was interesting to me to find out how he would do in this mock interview.  He handled himself very professionally in the contrived setting, and came across well in the interview.  After the interview I debriefed him on how he did and also gave him my take on possible options for him in the wine industry.  Since he and I had met at a restaurant and only consumed water during the interview, I wanted to make sure the restaurant made a little money off of my table that afternoon, so I encouraged him to order something to eat and drink.  I ordered a light appetizer, and a glass of wine.  Did he?  No.  Smart man.

When I put together my notes from this meeting for his parents, I mentioned his abstaining from drinking during our meeting, and gave him big kudos for that.  I think drinking alcohol can be fraught with meaning in a business setting, and for a young graduate, something to stay away from at all costs.  Oh, I know I'm a wine industry recruiter, but an interview is an interview, and the same rules apply.

Case Histories Two and Three:  On the flip side of this, this weekend I had several meetings with both job seekers and clients who were discussing projects.  At one of the interviews I ordered a beer but my interviewee did not--although we were dining at a brewery.  I thought this showed a lot of restraint on her part, and of course caused me to start to worry about how I was being perceived!  At one of my project meetings my client brought along one of their wines to try--so of course I had a glass of this wine.  But I did not have a second glass, nor did he.

What to Do:  When meeting with a prospective employer, keep your demeanor completely professional.  Now, we do want to find out a little about you when we meet, so don't worry about talking a bit about your personal life.  And when meeting at a restaurant for an interview, try to brush up on your basic etiquette so you don't embarrass yourself by drinking out of the ice bucket.  And try to match your dining companion's pace and conversation style.

Pace Yourself: Yes, pace yourself my friend!  This can be the hardest thing to do at a business lunch--but I'm not talking about pacing your drinking.  Try to see what kind of meal this is going to be.  When you first arrive you'll get the menu and maybe hear about the dining specials.  I think this is a great opportunity to gauge how much food the other person may be eating.  If they mention that the salad at this place is a meal in itself, they may be planning to just have a salad for lunch--so stay away from ordering an appetizer, a salad, a soup, an entree and a dessert.  You'll have plate after plate coming at you, and your guest and others waiting for you to eat.  The meeting is a time to show off you talents for the job, not how much you can eat.  I also try to let my companion order first, so I can see if they will be having a few courses or sticking with only an entree.  If they order a first course, I try to too.  I don't want them to be desperately trying to finish their soup before the next course comes, while carrying on a conversation about what we are really there to explore.  So, try to keep your order in sync with theirs.


Order Wisely:  Ok, now that you've thought about the amount of food you should order, try to take into account how the food you want to eat will interfere with your meeting.  A few weeks ago I ordered a wonderful summer stew at a meeting, and was very worried when it had shell-on crustaceans and whole cobs of corn to wrestle with.  It was even better when my corn cob sailed through the air after I was trying to get the kernels off using a knife and fork.  While I don't like to get too picky with what I am ordering, it may have been better to make sure this seafood stew would be meeting friendly.  Years ago I worked at a company that forbid us employees from ordering anything that required eating it with our hands.  I have followed this policy loosely in all my ordering--staying away from big juicy burgers and shying away from french fries.  But I do slip occasionally and order something that requires manual manipulation.

And Now the Big Decision:  "And what would you like to drink today?" the waiter asks you eagerly.  If your answer is "hair of the dog that bit me" or "double scotch on the rocks" you may find that your meeting quickly devolves from a meeting highlighting your stellar qualifications into something much less spectacular.  If they say they would like to try one of the beers on tap, or ask the waiter what wine would be good with their fish--be hesitant in ordering a drink too.  You can't go wrong with water--sparkling or still.  Another safe option often is iced tea.  And good old lemonade can keep you focused and hydrated. Isn't that why you would want something to drink anyways?

Why You are There:  Alright, so now that you got all the ordering taken care of, keep your focus on the meeting--not the food.  You want to enjoy your meal--but if you have something that is so-so--keep your opinion to yourself and carry on with the conversation.  If there is truly something wrong with your meal, decide what you need to do--if you must send it back--do it, nicely.  But if it was a little underwhelming, eat a little and be happy you won't get caught with your mouth full of food very often.  You want to be talking a lot, so don't worry if you don't eat much.  Just have your plates cleared when your companion's are, and be thrilled to get the time to highlight your qualifications.

Coffee Anyone?:  And if the meeting is going well and your host wants a cup of coffee, by all means have one too.  This time can sometimes be a nice chance to talk without plates of food between you, and often is a time to see what the next steps are in the interview process and learn how you are being perceived by the--hopefully future--employer. 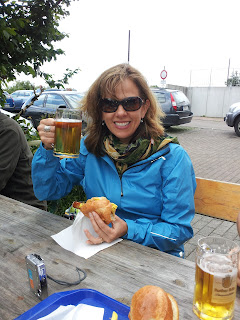 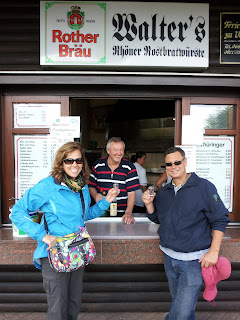 Right before heading out of town we had to stop for a good Pilsner and bratwurst and of course some pomme frites.  As with all great hosts here, we couldn't say goodbye to Walter without a schnapps-homemade even.  20 years since I first went here, but it felt just like old times.  Prost!
Posted by Amy at 9:47 AM No comments: 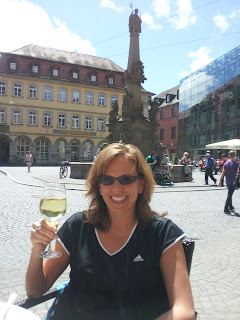 Trains, buses and foot to get back up north.  Now stopping in a great city that was the bishop's residence and where Napolean visited with a coach of 8 horses.  Although quite the impressive sight, the bigger,wider coach was not able to turn around in front of the residence--always a bummer!  Luckily I was able to easily manuever the streets and find Ratskeller to enjoy some nice white wine.  The roads getting here and back are quite romantic, with beautiful views of vineyards and stops at wineries. 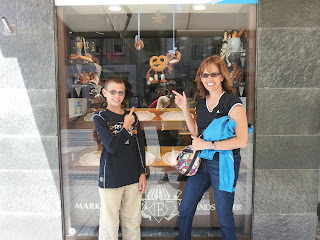 Having been here 20 years ago, I still remember the great pretzels they make here.  Unfortunately for me and my son, it was Sunday and this bakery was closed.  We had to settle on pretzels from the corner cafe.  Or should I say brezels! 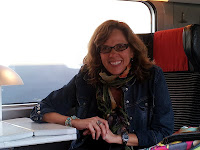 Although I'm home and have left Europe weeks ago now, just posting photos from the tail-end of the trip make me sad to leave!  So, from my last spot in Vatican City (a country and a city all rolled up into one) I headed north by train to a spicy city known for it's excellent condiment.  This was my first time using the trains in years, and I loved it.  Once I got to my destination I ate boeuf bourguignon and drank a lovely red wine in the restaurant by les halles.  Spent a cozy night at Hotel Victor Hugo that had a nice courtyard and cool night breezes punctuated by the hoots of an owl.  Where was I? 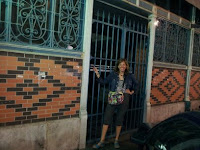 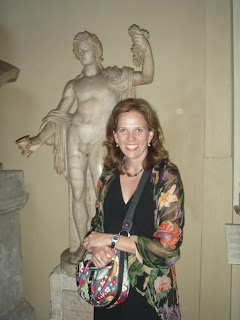 Made it to a new country to visit the basilica, the museum and strolled by some wonderful sculptures (my favorite medium).  The Greek god of wine and Festivity was flamboyant in all of his incarnations.


After hours on the grounds, I stopped at a great casual restaurant in this country's only city, Hosteria Pizzeria Da Vito E Dina.  (There's Dina and Vito with me!)  Loved the food and hospitality here I had to come back the next day.  The mussels marinara have me begging to fly back now.  Where was I? 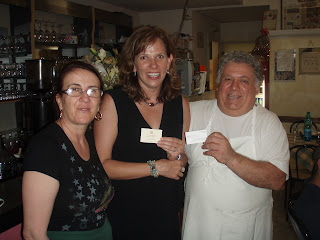