I've decided this week that I'm now officially going to consider myself an extrovert, while still holding onto my introverted thought processes. Having previously discussed thoughts about power postures and how to present yourself in public, I often promote the idea of appearing to be an extrovert. And this week in the WSJ there was an interesting article: How an Introvert Can Be Happier: Act Like and Extrovert.  Well, I want to be happy, so I'll gladly act like an extrovert. 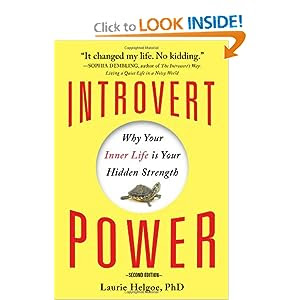 Several months ago I read the book Quiet:  The Power of Introverts in a World That Can't Stop Talking which did a good job of looking at American society and the role personality plays within it. Following on this I read Laurie Helgoe's second edition of  Introvert Power:  Why Your Inner Life is Your Hidden Strength.  Laurie's book discusses the introvert's personality strengths, how to be proud of them and how to use those strengths to your advantage.

If you are examining how you perceive yourself and how you are perceived, it would be a good book to read.  Laurie uses many personal stories to relate to her topic.  She also has some helpful advice on how to nurture your inner self to find your strengths and how to translate them into social situations.  It could help you use your internal resources in situations where you need to make your strengths known--be it in interviews, networking events or public presentations.  Introvert Power also gives introverts and extroverts the ability to better understand each other.  Power to the Introverts and Extroverts alike!
Posted by Amy at 11:42 AM No comments:

WineTalent is currently working with our winery client in the Napa Valley to find an Accountant.  The Accountant will be a key contributor to the winery business and will provide exemplary customer service to the winery management team, the winery's business partners and customers.
The Accountant will be responsible for the financial reporting, accounts payable, accounts receivable, and other general accounting functions following generally accepted accounting practices, adhering to the policies and procedures of the winery.

Cranky Recruiter: Stood Up for the Interview

Oh, hey, just back from driving for an hour, waiting around for an hour and driving back for an hour.  So that would be about 3 hours, give or take, of wasted time.  What was I thinking?--I made an appointment to interview someone last week, showed up at our arranged meeting spot, and he wasn't there.  I called, emailed, and haven't heard back.

This was an interview for a highly technical position, and it is hard to find qualified candidates for it.  Having that resume show up in my inbox was a thrill by itself.  Quickly I called him, did a phone interview, and with everything looking promising we booked an interview.

Then the doubts started creeping up.  I was rereading his resume and cover letter and there were inconsistencies.  He mentioned working at one company on his cover letter and on his resume another company was referenced.  Hmm, well that's something to ask about at the interview--maybe he was a subcontractor--maybe.

The second red flag was that this guy, who is a technically skilled winery professional, has been out of work for the last year.  When searching for people in this field, they are snatched up almost immediately when they are in the job market.  Hmm, what's up with this guy?

Oh yeah, and the guy of course suffered from TMI--giving too much information during our phone call.  Marital status, kids, bad previous employers, etc.  Good to know, but it was a bit of a sob story.

Ignoring these red flags I booked our interview.  While figuring out a spot to meet he mentioned that there was a good bar around the corner.  Hmmm, always good to know where the bar is--but not for an interview.

While sitting around waiting for him to show, I thought it made sense to send him a quick email.  Here's when I noticed his email address was a reference to alcohol.  Hmm, maybe I should worry about drinking on the job?  Maybe about missing work due to being on a bender? Or better yet, missing this interview because you didn't wake up this morning.

I'll now make sure not to miss any red flags, and trust my gut instincts.  The motto of a good recruiter, "Trust your gut!"  Now onto those other promising candidates.  Hope they didn't take a job during the time wasted waiting around for Mr. Fillerupbarkeep.
Posted by Amy at 3:59 PM No comments: